Finding the cause of a polio-like illness

For some researchers who spend their days tucked away in a lab, the impact of their work may at times seem removed from the lives of real people. Not so for Dr. Kevin Messacar, pediatric infectious disease specialist. In his mind, he has considered himself a physician first, researcher second since he came to Children’s Hospital Colorado in 2009.

Yet over the past several years, Messacar’s research has taken the focus as he plays a major role in identifying the cause of a devastating polio-like illness called Acute Flaccid Myelitis (AFM). This rare but serious neurological illness affects the brain and nervous system, causing muscle weakness and even paralysis.

The Centers for Disease Control (CDC) says viruses play a role in AFM, but has yet to acknowledge a definitive cause. Messacar however, believes the primary culprit driving recent outbreaks of AFM is an enterovirus known as EV-D68.

“I would say that while I always had an interest in research, I was not passionate about it until getting involved in the patient-facing side of research and seeing its impact on patients and families we care for,” Messacar says.

In his office, he points to pictures of kids and families, from letters to him, pinned to the bulletin board above his computer: kids he has been following since 2014, the first year AFM showed up in a significant way at Children’s Colorado.

One of those kids is Lydia Pilarowski, who came to the hospital six years ago when she was unable to move her left arm. Fortunately, Lydia has made an almost full recovery and even participates on her ski team. Yet many children are not as lucky. Through early diagnosis and physical therapy, some patients experience improvements in movement. Others remain paralyzed, and unfortunately, some do not survive.

Lydia and her mother Sarah have stayed in close touch with Children’s and Messacar, participating in a study and eagerly advocating for more research. Sarah says she is impressed by the drive of everyone at Children’s to make sure physicians and researchers stay focused on AFM.

Messacar continues, “I have parents who call me every few months to ask, ‘what have you learned?’ That is a really motivating relationship to have as a researcher.”

The winding road of research

In 2011, Messacar was a junior investigator who, in collaboration with the CDC, started a study on arboviruses. Through mentorship from Dr. Sam Dominguez, Messacar’s project morphed into a prospective study of children with suspected central nervous system infections. Messacar sought to find out which emerging technologies can be used to improve diagnosis and how outcomes differ by diagnosis, treatment and rehabilitation strategies. A year later, he received a CCTSI pilot award to fund this early work, which is conducted at the CCTSI’s pediatric Clinical and Translational Research Center at Children’s Hospital Colorado.

Today, eight years later, the study is still open! And it has been instrumental in determining the viral culprit of many of the AFM cases doctors have seen at Children’s. Through this study, and his research team’s ability to enroll children in the hospital with central nervous system infections, Messacar observed the first cluster of EV-D68 associated AFM in 2014.

“In 2014, in the middle of our study, we were able to obtain the first research samples [from kids with AFM], a description of our clinical cohort and track the outcomes of these kids over time,” Messacar says.

In addition to observing children diagnosed with AFM, Messacar has also advanced research showing causality between EV-D68 and AFM. “Dr. Ken Tyler, chair of neurology who studies neuroinvasive viruses, has put the virus into neonatal mice in his lab to replicate AFM in an animal model. At CU Anschutz and Children’s, we have been at the epicenter of research into discovering the cause of this new disease.”  Messacar stresses that this research has been a team effort on the CU Anschutz campus, including multidisciplinary collaboration between researchers in infectious disease, neurology, radiology and rehabilitation medicine.

To be clear, EV-D68 is not the only virus that causes AFM. In 2018, Children’s Hospital Colorado saw an outbreak of children with neurological diseases that were caused by another enterovirus: EV-A71. The majority of children who were impacted by this virus had meningitis or encephalitis; but 20 percent did result in AFM.

Through his original study, Messacar will continue to monitor central nervous system diseases of patients at Children’s Colorado.

Yet, because of the potential for continued outbreaks of AFM, he has been advocating that more resources be allocated toward it. Last year, Senators Gardner and Bennett visited Messacar’s research team at Children’s to learn how they could support further research into the disease. As a result, Senator Bennet sent a letter to the CDC to urge further action to inform the public, support research for AFM and enhance detection. 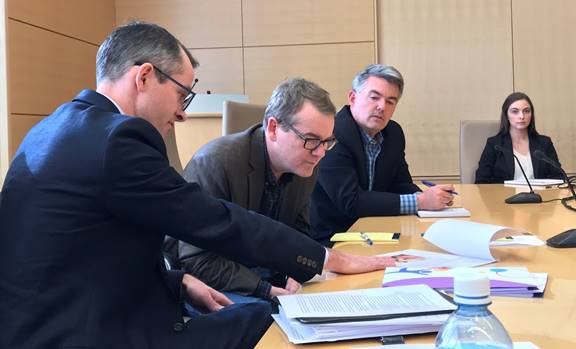 In the spring of 2019, Anthony Fauci, director of the National Institute of Allergy and Infectious Disease (NIAID), allocated $10 million toward a multicenter prospective AFM study, for which University of Colorado will be a contributing site. In addition, EV-D68 vaccine candidate studies will soon be launched. Messacar has been named to the CDC Acute Flaccid Myelitis Task Force to assist in aligning priorities for the national AFM research agenda.

Locally, Messacar made a presentation to the nurses in CCTSI’s pediatric clinical and translational research center (CTRC) where the clinical research takes place at Children’s Colorado.

He told the nurses, “Everyone has an important part to play in the success in research. That kid you drew blood on, his sample may now be at the NIH being used to develop the next vaccine…There is a bigger picture to what we all do.”

Today Lydia Pilarowski is in sixth grade and talks about her experience having AFM as something that happened a really long time ago. Yet, when remembering her pain and the recovery process, she articulates precisely how she felt and the many ways it impacted her both physically and emotionally.

Her mom Sarah says that though the experience was traumatic and nothing anyone would ever want to go through, the kids who experience AFM are resilient, and this inspires her. Lydia eloquently sums it up, “The only way we can make it better for others in the future is if we do research studies, so we can have these vaccines or medicine to help people like us.”