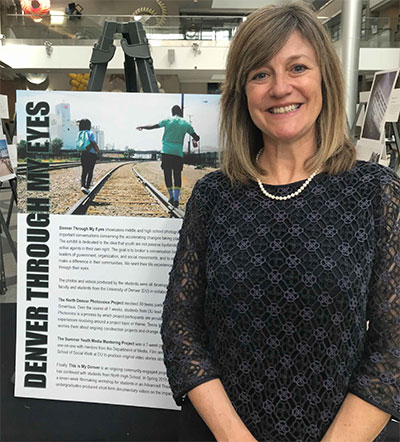 This fall, the city of Denver hosted a photo and video exhibit called Denver Through My Eyes. The artists were youth who created videos and photos to show what they liked and what they would like to change about the places they live. One of these artists, Megan Marrs, an eighth-grader from Crown Pointe Academy in Westminster, wanted her video to spread awareness of unnecessary violence in her community. Megan believes that her city, Westminster, should provide community days that enable police officers and neighbors to get to know one another. Megan said that in the past her neighborhood experienced the deaths of innocent people, particularly police officers. "My hopes for those who view my video is to have authorities be able to come to schools, so students can meet them and perhaps have community gatherings so police officers and young people can get to know one another to prevent unnecessary deaths," states Megan.
In 2017, Lynn Schofield Clark, Ph.D., won the CCTSI Community Engagement pilot grant to support her research to explore how the media influences the lives of youth, and how young people can use media to make a difference in their communities. One aspect of her work was to train young people to become leaders, no matter their circumstances, by encouraging them to share their personal life stories and to then find connections between those stories and the stories of their communities. Dr. Clark created the Summer Youth Media Mentoring Project in partnership with the Bridge Project. (The Bridge Project provides advising for Denver’s youth who live in public housing neighborhoods, offering them a support system to continue their engagement with educational opportunities.) The Summer Youth Media Mentoring Project targeted youth living in five Denver-area neighborhoods with which the Bridge Project works: Westwood, Lincoln Park, Sun Valley, Quigg Newtown and Columbine.
“The project enabled young people, especially those who often feel like no one listens to them, to put their voices in a public forum. It allowed them to learn how to target a public that will listen to their stories and a public for which their stories can make a difference,” says Dr. Clark.


Furthermore, the CCTSI pilot grant allowed Dr. Clark to explore how the media impacts the lives of the youth by providing them with tools to express themselves in a public forum.
"My own research is in media studies, and I am particularly interested in political newcomers and how young people use social media to become aware of and engaged with their communities,” says Dr. Clark. The project builds upon The Bridge Project’s efforts in that it trains youth to be leaders, adding political goals to the Bridge Project’s academic emphasis. “By having them involved in conversations with adults, junior high-aged people can learn to be leaders and model political leadership among their peers. The program allows young people to use the Adobe premiere platform to create a narrative that expresses their personal and community struggles and their resilience in addressing those struggles,” states Dr. Clark.
The summer Youth Media Mentoring Project has helped young people to share their narratives with decision makers and with their friends and family members. Moreover, because of the opportunities that arose from the CCTSI pilot grant, Dr. Clark has committed to join the Bridge Project in order to continue her work helping youth to become leaders in their community.
She hopes to continue to support the Bridge Project’s youth advisory board, which cultivates peer leadership within their communities throughout the school year. As for the programming role of video storytelling, the Bridge Project is considering several options and consulting with the youth in order to put together a grant proposal that will help build and expand their efforts for the upcoming year.

She hopes to continue to support the Bridge Project’s youth advisory board, which cultivates peer leadership within their communities throughout the school year. As for the programming role of video storytelling, the Bridge Project is considering several options and consulting with the youth in order to put together a grant proposal that will help build and expand their efforts for the upcoming year.